Kennet Valley TR Group has two mid monthly's in September, the first being a visit to Taplow Court. We plan to muster at Theale Golf Club for circa 10:00 where brunch will be available for a small cost (details below) and then we will follow a picturesque route missing busy roads and motorways to arrive at Taplow Court.

Theale Golf Club offer can offer you the following.choices, please let us know so we can pre-order?

Taplow Court is a large Victorian house in the village of Taplow in Buckinghamshire, which has served as the national headquarters for the Soka Gakkai International of the United Kingdom (SGI-UK) since 1988. The Taplow burial, a 7th-century Anglo-Saxon burial mound, is in the grounds of the house, near the parish church which is scenically positioned on a hill directly above Maidenhead Bridge and the town's riverside district. The mound was excavated in 1883 and a number of treasures were discovered, of quality of the early Saxon centuries surpassed only by Sutton Hoo in 1939.

There has been a manor house on the site since before the Norman Conquest in 1066. The manor was owned by the monks at Merton Priory until the dissolution of monasteries. It was then owned by the Hampson family in the 17th century, coming under attack during the English Civil War. Throughout the 18th century and through to the 1850s, Taplow Court was home to the Earl and Countess of Orkney who has also owned the adjacent Cliveden

From 1852, Taplow Court became the home of the Grenfell family, purchased by Charles Pascoe Grenfell in August of that year.[1] His family had it rebuilt in 1855, as it is dated, etched into the masonry. The exterior in an early Tudor and the interior (with its central glazed hall rising the full height of the house) in Romanesque architecture dressed in light stone and has a slate roof, has four storeys with 2 stone stringcourses carried round the building as drip moulds over the windows. It has a central projection with a porch. Here its heavy oak door is set in recess with a Norman arch. 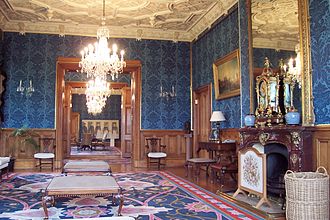 An interior room at Taplow Court

It was inherited in 1867 by his grandson William Grenfell, 1st Baron Desborough where a prominent social role was also played by his wife Ettie. Their son was war poet Julian Grenfell. They prominently hosted an aristocratic and elite group known as "the Souls" at the house. A stické court was built by Lord Desborough at Taplow Court in 1892 and the dimension of this court subsequently became the standard size of the court. After World War 2, Taplow Court was owned by British Telecommunications Research, a subsidiary of Plessy until 1988 when it became a Soka Gakkai International Buddhist centre.

There is a cafe at Taplow Court, drinks, cakes, and cream teas are usually on offer, or you can take your own picnic, some outside tables and chairs available (weather permitting). Lots of House and gardens to see. We'll have our own parking area, so be together.

We have room for about 20 cars, so please book early to avoid disappointment by sending an email to Mike Field or Phil Horsley, we look forward to hearing from you.